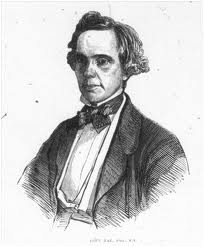 Rae, who was born in Scotland in 1813, was the son of a banker. He had been educated at Aberdeen Grammar School and later went on to study at the University of Aberdeen. Articled to a solicitor, he later continued his literary interests and law studies in Edinburgh. After deciding to migrate to Australia he joined the firm of North British Australasian Loan and Investment Co. He arrived in 1843 aboard the Kinnear. Unfortunately for Rae the firm was almost broke by the time he arrived.
He married Elizabeth Thompson in 1854 and the couple made a home at Darlinghurst. Rae was the Town Clerk of Sydney in 1851, and together with Charles Cowper, he sought an investigation into the state of the Council. He supported the setting up of a select committee that appointed three commissioners: G. Eliot, F.O. Darvall and Rae himself. However charges of mismanagement and neglect saw the Legislative Assembly dismiss the commissioners and restore the Council to a corporation in 1857.
Rae travelled overseas and was a noted educationalist, photographer, and amateur artist, painting for his own pleasure. Rae was also a director of the Australian Gaslight Co. and owner of the People’s Palace. The 1875 Sands Directory refers to Mr John Rae as being the Under Secretary of Public Works and Railways, while the 1882 Gibbs and Shallard directory mentions the residence of J. Rae at Valley Heights. This may very well have been the cottage Tusculum, as the index mentions that it was one of the principal residences then existing in Valley Heights. Other residences mentioned were those of I. Brennand, W. Deane, W. Dawson (Upton), and Mrs Berne.
The Valley Heights property had first been acquired by Mr T.R. Smith under conditional purchase, but in later years was bought by Rae. Clarence Radford Chapman, a civil servant, together with Lancelot Percival Brennand, whose address was care of the Treasury, purchased the property when Rae died in 1900.
In 1882 the Nepean Times reported that a discovery of silver had been found in the mountains. The article went on to say that the peculiar discovery had been made on the property of Mr John Rae by a pig rooting around in a paddock close to the homestead. A search of the area revealed Spanish dollars dated as old as 1804, bearing the heads of Ferdinand and Carolus. Amongst the hoard of coins was also a ‘colonial holey dollar’, a five-shilling Bank of England and four lion shillings dated 1826. The paper stated that the mystery was unlikely to be solved, since judging by the dates on the coins they had probably been buried for some fifty years.
Article from Biographical Dictionary of the Springwood District
Pamela Smith
Posted by Pamela Smith BA (Hons) Hist. Adv. Dip. LFAH at 4:00 PM