Background (Preamble):
In late 2011, the State Records Authority of New South Wales announced the closure of the city reading room effective 30 June 2012. The History Council of NSW believes that the access to records is fundamental to the study of history.

State Records has been directed, along with other state government agencies, to make substantial savings to their budgets. Over the next four years State Records is expected to save a total of $1.8 million.

State Records is one of NSW’s key cultural institutions and an invaluable research facility for any historian’s investigations into aspects of the functioning of the state, from colonial and convict history, through all the permeations of the state’s role in people’s lives.
While the History Council acknowledges the challenges faced by State Government to be fiscally responsible, the budget cuts imposed on State Records NSW has a severe impact on the accessibility of records and services.

The cuts will downgrade the archives, undermining its position as a key cultural institution, limiting access for key user groups, and hampering the organisation’s role to inform and support state government, especially in its ongoing role in the state’s Digital Archives as well as guiding digitisation of records across NSW government. 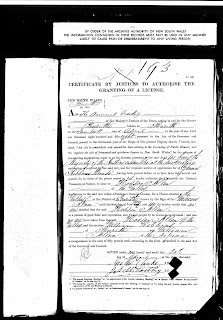 Hodson Allen was  the licensee of the Welcome InnValley Heights from 1858 until 1860. The inn had also been known as the Valley Inn.
Posted by Pamela Smith BA (Hons) Hist. Adv. Dip. LFAH at 12:25 PM No comments:

William & Sarah arrived in Australia aboard the Julindur 5.4.1849.  He was a carpenter by trade.
Mary Ann and Susan  owned land in the main street of Springwood, a portion of which was eventually sectioned off to build the School of Arts building. Shops owned by the two sisters on the adjoining property were burnt down before the School of Arts was erected in 1913.

A caveat was added to the title deeds that would enable Mary Ann, Susan and any relative or next of kin to have access to a large underground well that was located at the rear of the School of Arts property. The caveat remained legal until approximately 1936 by which time reticulated water was connected to the town.

Margaret Amelia Aberline was listed on the 1903 electoral roll as a general servant. It is thought she may have worked in one of the large houses in the area that were owned - at the time - by parliamentarians and wealthy businessmen. Alternatively, she may have worked in one of the many guesthouses in the area.
She is thought to have been born in Victoria c1868 to James and Jeanette Aberline.
She was a woman of her time, making history by being among the first women to obtain the right to vote in NSW in 1903.  It would seem that she moved back to Victoria c1909 and died there in 1946.
Posted by Pamela Smith BA (Hons) Hist. Adv. Dip. LFAH at 11:35 AM No comments:

A recent conversation with, long-time resident of Blaxland, Davina Curnow, revealed information that it was her father - Adrian Melvin Donaldson - who built the little shelter sheds (that still exist) in the park at Blaxland located alongside the railway line.  It would seem that instead of war service Mr Donaldson carried out public works.  Over the years the little sheds have served a  multitude of locals, and visitors, when picnics were usual Sunday family outings.


The park, unfortunately, has reduced in size because of road widening, and the bridge that spans the railway alienated the triangular portion where Harold Campbell's World War One monument stands.
Pamela Smith
Posted by Pamela Smith BA (Hons) Hist. Adv. Dip. LFAH at 12:48 PM No comments: