SPRINGWOOD; where is it, location map and brief history 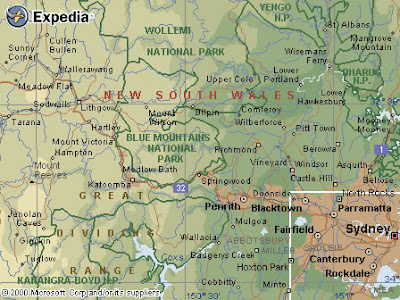 Springwood is 74 kilometres east of and lies 371 m above sea level in the lower Blue Mountains of New South Wales.  The town is one of 27 towns and villages that make up the Blue Mountains Local Government area.  In 2006, the census revealed that 8210 people resided in the area while the population of the Greater Blue Mountains, inclusive of Springwood, was 73,084.[1]  This local government area is particularly unique because 70% of the Greater Blue Mountains was incorporated into the .[2]
The Dharug and Gundungarra people occupied the for over 20,000 years.[3]  Eugene Stockton suggested that the proliferation of art sites and stone arrangements in and around the Lawson area – in the mid mountains - typify sites used as neutral ground or places for intertribal ceremonies, while the Springwood district was a regular resting place because of its plentiful food and water supply.
Nevertheless, European settlement was a long time arriving in the despite the successful journey of Gregory Blaxland, William Lawson and William Charles Wentworth in 1813. George Evans surveyed a route for a road shortly after the well-documented journey of the trio, and in 1814, William Cox supervised the convict-built road, which eventually opened up a transport route through to the west.  Springwood was named thus because in 1815, on his journey to inspect the newly built Western Road, Governor Macquarie wrote:
We then halted at three o’clock in a very pretty wooded plain
near a spring of very good fresh water, and pitched our tent
… This place being very pretty I have named it Spring Wood.
Shortly after ’s visit a substantial wooden building was erected at the ‘head of the Springwood Gully’ and marked the first military presence in the area.[5]  Several years later the Freycinet expedition related:
In the neighbourhood of the second military depot (Spring-Wood)
grow the most beautiful trees that we had seen in these parts.
The road to it opens in the midst of vast forests where you walk beneath
very pleasant domes of verdure.[6]
The military post served several purposes; soldiers regulated travel beyond the limits of civilisation and provided protection and overnight accommodation for travellers.  The Sydney Gazette often related tales of straying horses or travellers and in 1832 the newspaper reported that Springwood troops had been removed and deployed elsewhere.  In 1936 the site of the first barracks was unearthed in Railway Parade, Springwood.  Relics found on the site included uniform buttons inscribed His Majesty’s 4th; a key, as well as the remains of a rock chimney, and the grave site of a soldier.
Alexander Fraser built the Valley Inn at Fitzgerald’s Valley (present day ) in 1830, just prior to the removal of the military presence.   The inn, which was located roughly opposite the present day railway station, was the first public house in the area until Thomas Boland built the Springwood Inn in approximately 1847.  Springwood or Boland’s was located on the site of the second military barracks.
The enterprising pioneers who operated these isolated mountain refuges took provided food, accommodation and protection for the travelling public.  Sir Henry Parkes, Sir James Martin, the Honourable W.B. Dalley are known to have frequented Springwood Inn, as did Caroline Chisholm travelling with bands of young women immigrants.  The immediate area around the inn was also used as a camping ground by large numbers of Chinese people making their way to the goldfields.
Residential development however, was almost non-existent until John Whitton successfully engineered the zigzag railway system that enabled engines to scale the heights of the eastern escarpment in 1867. Thus, the extension of the railway line beyond Penrith could be regarded as the force that promoted development, albeit on a small scale.   Railway staff was required to open and close the gates at several points where the railway line crossed over the highway.  Gatekeepers - with their families – were given accommodation in the small sandstone gatehouses - built to identical specifications - along the western line.
The Nepean Electoral Roll for the period 1868-1870 listed the following men:
Thomas Boland Senior and Junior – freeholders, Springwood
James Clarke - resident, Springwood ridges
Matthew Clarke – householder, Valley
Thomas Coyle – resident, Springwood
J.T. Ellison – resident, Springwood ridges
Philip Freley – resident, Springwood
William Holloway – resident, Springwood
Cornelius Lees – resident, The Valley
Francis Reymann – freeholder, Springwood
George Richardson – resident, Springwood
Thomas Smith – freeholder, Valley
John Stakes – resident, Springwood
Mark Thew – freeholder, Springwood
William Tottle – resident, Springwood
Early parish maps illustrate that politicians, senior public servants and wealthy businessmen soon took up hundreds of acres of available land to the north and south of the highway and railway line.  Country/weekend retreats were quickly established to replicate a fashionable trend started by the English who built hill forts in the cooler climate of the foothills of .[7]
While the Boland family owned most of the land adjacent to Springwood railway station, men such as Sir Henry Parkes, Sir James Martin, Sir Alfred Stephen and Professor Charles Badham owned land from Linden to Faulconbridge and Lancelot Iredale Brennan, the Deane family and Geoffrey Eagar MLA owned most of the land at Valley Heights.  To the north of Springwood - along the present-day

Hawkesbury Road – men such as John Ellison and Cornelius Lees took up smaller holdings to establish small farms and orchards.
The part-time residents could not exist in idyllic isolation however; they needed house servants, gardeners, cooks and caretakers as well as the daily necessities of life, which were supplied by William Rayner, Springwood’s first grocery shop owner.
Despite the eventual carve up of the large estates in the early decades of the twentieth century, urbanisation did not really take off until after World War II.  Electrification of the railway system in the 1950s promoted urban growth which intensified even further throughout the decades of the 60s and 70s.
This is by no means a definitive history of the area and the Springwood Historians hope you continue to visit this site to learn more.
[1] Blue Mountains City Council, Census data,
[2] BMCC
[3] Eugene Stockton & John Merriman, Dreaming. The Aboriginal Heritage, 2nd ed.
2008.
[4] Alphonse Pellion, Savages des Montagnes Bleues, File no. 001/001/381 City Council
Image File.
[5] J.F. Campbell, Historical Notes On The Earliest Days Of Springwood And District, Facsimile reprint
Springwood Historical Society, 1986, p. 5.
[6] George Mackaness ed., Fourteen Journeys Over The Blue Mountains Of 1813-
1841, Horwitz, Sydney, 1965, p. 95.
[7] Andrea Scott Inglis, Summer in the Hills The Resort in ,
Australian Scholarly Publishing, , 2007, p. 62.