Using this site for research

Just recently it was particularly heartening to see that John Wycliffe Christian School included this blog among other useful sites that students might use for a recent assignment.  The in-class assignment could be structured around Places: Then, now and Tomorrow or Identity and Values as they related to Anzacs.


The blog has been operating for just over one year and we would be interested to hear from any student or teacher that has used the blog; your comments would be valuable and enable us to structure the format around the school curriculum or include format that was useful to students.

The Nepean Times announced in May 1892 that Mr Thornton of Sydney had commenced the erection of a commodious wood cottage on the main road and just a little west of the station. The cottage was called 'Lorna Doone' and Edmund ran it as a guesthouse.
George Stratton caused Mr Thornton some grief in January 1893 when he broke pot plants and threw a fence rail at one of the cottage windows. Edmund and his brother Charles caught Stratton after a chase of half a mile and Stratton was later charged with the crime.
In 1893 Edmund took over the position as the pound keeper after Mr Stace resigned. He involved himself in the dealings of the growing township and in April 1893 moved that a Progress Association be formed in place of the current Progress Committee. The suggestion met with success and Mr G. Larsen seconded his motion.
A committee was formed in June following a suggestion from Edmund regarding possible sites and costs for the erection of a Public Hall. They were to report to the next meeting of the Progress Association. The committee comprised of Messrs C. Lees, J. Tanner, Mr Honeysett and officers of the association.
Controversy arose in July 1893 after a long and animated debate about the proposed public hall. The Hon. Charles Moore had offered a suitable site if money was forthcoming or could be raised to build it. Edmund was somehow blamed for not supplying more details and the matter had to be adjourned.
Edmund assisted at a benefit concert given to aid the Coyle family through their loss in 1893, acting as an accompanist.  Later, in August 1893, he had a serious horse and buggy accident.
The Progress Association resolved in November 1893 to send Edmund and Mr A. Ferguson to a meeting at Lawson for the combined Mountain Delegate Association of which Mr G. Larsen had nothing but praise. In a complete turn about - that resulted in the resignation of Edmund from the Springwood Progress Association - Larsen wanted the matter adjourned to a later meeting, when they came back with the result. Larsen said he could not see what benefit the Mountain Delegate Association could be to Springwood and moved that the secretary write back declining their offer. Edmund said that if Larsen’s motion was supported he would resign. Mr Baxter junior seconded Mr Larsen’s motion, it was passed and so Edmund resigned on the spot.
Edmund became discouraged early in February 1894 because of the poor patronage of his guesthouse and decided to let the cottage to Mr De Lissa of Sydney who was a photographer. 'Lorna Doone' was let to the De Lissa family for one year.
Edmund married Margaret Thurston in 1891 and his brother Charles married her sister Roberta.

What can we give in return
For her beauty and mystery
Of flowering forest, infinite plain
Deep sky and distant mountain chain,
And her triumphant sea,
Thundering songs of liberty.

What can we give in return
For her beauty and mystery
Of flowering forest, infinite plain,
Deep sky and distant mountain chain
And her triumphant sea,
Thundering old songs of liberty[1]


Dowell O’Reilly, better known perhaps as the father of author Eleanor Dark, was a schoolmaster turned parliamentarian and an author and poet in his own right. Dowell, born in Sydney on 18 July 1865, was the second of four children born to Anglican clergyman, Rev. Thomas O’Reilly and second wife Rosa (nee Smith).[2] He was educated at Sydney Grammar School and took up a teaching post at ‘Hayfield’ to assist his mother after his father died in 1881.[3]  It was there that he met Eleanor McCulloch – the music teacher - who he married in a quiet, almost secretive, ceremony on 28 December 1895.[4]  The bride’s parents and close friends were absent which, according to Barbara Brooks and Judith Clark caused ‘quite a stir’ when the union became common knowledge.[5]  Albert Bathurst Piddington, who a year later married Dowell’s sister Marion Louisa, was his best man. Piddington, like Dowell, had been educated at Sydney Grammar.

Marriage to Eleanor Grace McCulloch meant that he became the son-in-law of the controversial politician, Andrew Hardie McCulloch.  McCulloch is perhaps better known in the Blue Mountains as the owner of the - now derelict - cottage ‘Eurama’ located at Linden.  The ruins of the cottage are a familiar sight to road and rail traffic as they pass by today.
O’Reilly was also related to Dr Charles Badham, Professor of Classics at Sydney University, through Badham’s first marriage to Julia, sister to O’Reilly’s mother.[6] There is some speculation that Badham may have assisted O’Reilly’s mother when she opened ‘Hayfield’ as a preparatory school for boys at Parramatta.[7] An article in the Illustrated Sydney News in 1889, suggested that ‘Hayfield,’ presided over by Mrs. O’Reilly, was an efficient and comfortable school.[8]
Dowell and Eleanor had their first child, named for his father, in 1899.  Eleanor, named for her mother, was born in 1901, while Brian arrived in 1905.[9]  Dowell junior died in 1926, Brian married Norah Wilson and died at Wentworth Falls in 1985 in the same year as sister Eleanor (then Eleanor Dark), who died in Katoomba.

In 1886/87, Dowell played cricket for Central Cumberland against the visiting English side, and in 1888, he was commissioned second lieutenant in the Parramatta Volunteer Rifles.[10] He transferred to the reserves in 1898. Dowell was elected to the Legislative Assembly for Parramatta in 1894, on a free trade ticket.  Shortly after, he moved a motion in parliament in favour of female suffrage.[11]  Dowell’s sympathies for female suffrage endeared him to Rose Scott; they became firm friends.[12]  In 1898 he returned to Sydney Grammar where he remained a master until 1909.[13]

Although his literary career began in the 1880s, it was somewhat less than spectacular.  He is known to have destroyed volumes of A Pedlar’s Pack, because sales of the book of verse had been inadequate.[14]  By the 1890s his literary career seemed to have picked up because he regularly contributed poems and short stories to the Bulletin and other publications.[15]  Night classes at the University of Sydney in 1889 brought him into contact with scholar and writer, John Le Gay Brereton, and the equally talented poet, author and scholar, Christopher Brennan.  One-time Professor of
Economics, Robert Francis Irvine, was also a mutual friend.  The men were involved in publication of the short-lived Australian Magazine and were members of the Casual Club.[16]

In 1910 Dowell contested the seat of Parramatta as a Labour Candidate and counted W.M. Hughes among his circle of friends.[17]  His friendship with Hughes was to have long term effects and was thought to have caused a rift with his brother-in-law, A.B. Piddington.[18]  A column in the Sydney Morning Herald called ‘Sydney Day by Day’ carried a very tongue in cheek view of Dowell. The article implied that he was somewhat of the ‘Bohemian order,’ and well thought of in ‘local literary’ circles.[19] The article went on to suggest that Dowell found favour among the ‘womenfolk of the State’ although ‘not an enormous number,’ who, by that time, had won the right to vote.
The Herald correspondent suggested that Dowell had written some ‘acceptable poetry’ and his ‘crisp and appetising’ style was reflected in a letter sent to the paper regarding his feud with Piddington.[20]   Michael Roe suggested that while Piddington was intellectually gifted, he was of a turbulent disposition and prone to recurrent ‘displays of wayward emotion.’[21]  Thus, O’Reilly’s claim (see below) may have been correct. However, over recent years a darker side to this feud has been revealed by Helen O’Reilly and Marivic Wyndham, which had little to do with politics but more to do with personal issues within the family.[22]

Years of illness preceded the death of Eleanor Grace O’Reilly, who eventually died in 1914.[23] Dowell’s second wife, Marie Rose Beatrice (Mollie) Miles, who he married in 1917, was a cousin he met in England in 1879.[24] He continued contributing to periodicals and in 1913 published Tears and Triumph, that, while fiction, sketched an ‘outline of his suffragette philosophy.’[25]  The local studies collection in Springwood library hold several of Dowell O’Reilly’s works including Tears and Triumph, Fivecorners, The prose and verse of Dowell O’Reilly and Dowell O’Reilly from his letters.

Dowell died of pneumonia and vascular disease at Leura in 1923 and was buried in the cemetery at Blackheath.
Pamela Smith 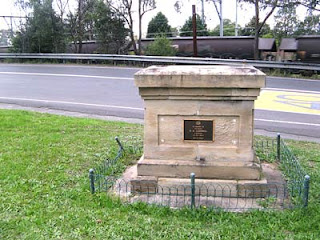