Sir Francis Forbes, according to information supplied by Doug Knowles (Glenbrook Historical Society) applied for a grant of land that would have included - what today is known as – Euroka Clearing at Glenbrook.  However, Forbes was unsuccessful in gaining the 500 acres he required for grazing and instead received some 355 acres that encompassed - the present day – Lapstone estate.  Euroka remained Crown Land until 1954 when the NPWS incorporated the property into the Blue Mountains National Park.
Nevertheless, Forbes was granted a lease over the property in 1835, paying an annual rent of £10.  After Forbes relinquished the lease in 1865 the following were subsequent leaseholders.


Wheat was grown on the property in the time of John Rayner who had a mill at Emu Plains.
It would seem that mining exploration took place on the property at various times because the Nepean Times reported 27.9.1884 (page 2) - when Edward Jones was the lessee - that exploration of the land hoped to find coal, shale oil.

Albert Bennett, the last lessee, was the son and one of a large brood of children born to Henry and Elizabeth (nee Clatworthy).  The Bennett family operated a boating business on the Nepean River and owned 'Riverside', the one-time 'Riverside Hotel' previously owned by the Wilson family of hotelkeepers.(Nepean Times 1.1.1910)  Henry, who died in 1910, was the brother of James and William Bennett of St Marys. Henry was born in England.(Nepean Times 4.6.1910)  Elizabeth died at 'Riverside' in 1921. (Nepean Times 17.12.1921)

On the 20th August 1898 the Nepean Times newspaper reported that hundreds of people who lined the banks of the Nepean River, anxious to witness the launch of Henry Bennett's steam launch "Warragamba,"  were disappointed because a log - a relict of the old punt road - delayed the launching until the following day. (Nepean Times 20.8.1898)  It was also reported that according to the wishes of the Temperance section of the community, water rather than champagne, was used for the christening of the launch.
Various newspaper reports attest to the fact that Bennett - in order to cope with the increasing river traffic - added pleasure boats to his large fleet and that the boats were locally made in his boat shed premises.  The boats were made from locally grown timber - like cedar grown at Monkey Creek - and water gum procured from the banks of the Nepean River. (Nepean Times 18.12.1897)
When Albert Bennett took up the lease of Euroka it is thought  he built a residence and orchard in the vicinity of what was called Apple Tree Flat. He kept on the family business and is said to have used the river to move timber and produce down river to Penrith.  Picnic parties were held at his farm where visiting guests imbibed spirits distilled by their host while playing games of two-up.  Over indulgence at one of these parties may have caused the drowning of Thomas Hemsworth - reported in the Nepean Times 1.12.1914 (page10) – when he was swimming in the river with two other men.  Albert Bennett went to his rescue but failed in his attempt to resuscitate the man.
This was not an isolated event however because several other drownings were reported by the Nepean Times newspaper.  Albert Bennett took part in the magisterial enquiry held into the drowning of William Everleigh Terrill reported in the Nepean Times 30.12.1898.  It may have been these unfortunate deaths that had caused Albert Bennett to start up a swimming class for boys and youths. (Nepean Times 4.12.1897)
Bennett also grew strawberries and grain crops like sorghum and maize. In fact a football picnic held in 1898 collected ferns and flowers and tasted the "lovely strawberries" from Mr. Bennett's plantation at the Basin and danced on board the new launch as they made their homeward journey. (Nepean Times 17.9.1898)

It seems the Bennett family provided both commercial and tourist steam boat service on the Nepean well into the 20th Century. Albert Bennett also ran a cargo business that moved men and materials to and from the first site of Warragamba Dam. (Was the dam named for Henry Bennett's steam launch?)  Use of supply boats was greatly improved when Bennett blasted a cart track along Euroka Creek to the junction of the river. 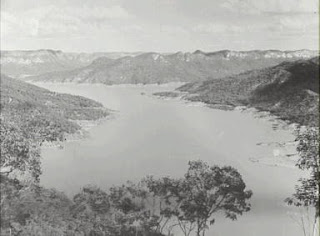 Albert Bennett, who died in 1954, is known to have been involved with the Blue Mountains Old Guard paramilitary movement and the Whitney Pastoral Company (an division of Cobb and Co.)

The Blue Mountains Association of Cultural Heritage Organisations Inc. have recently launched their new/revamped website. Available are digital newsletters and journals that provide a veritable wealth of information about the history of the Blue Mountains area as well as points of contact, links and various news and events. The site is well worth a visit. 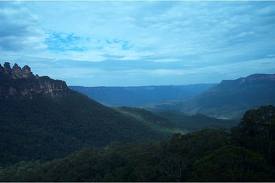