Ghostly encounters, paranormal activity and out-and-out unexplained incidents are commonplace in the cultural history of the Blue Mountains.  Some merely mythical, while others - based on fact – have been recorded for posterity.  Henry Lawson’s poem The Ghost at the Second Bridge is of the latter type and recounts the ghostly walks of young Caroline Collits in the vicinity of Victoria Pass Hartley on the Western slopes of the Blue Mountains.  The Lawson family had an association with the Hartley area and Henry Lawson penned the poem on a visit there in 1899, following the death of his father.


Caroline’s short and tragic tale, which captured the imagination of Lawson, began in 1827 when she had the great misfortune to become the third child born to convict parents William and Mary James.  The James family moved to Woodford in the 1830s where William operated an illegal grog shop in the vicinity of the present-day Woodford Academy.  Tragedy struck in October 1835 when Mary James – said to have been a habitual drunk - was found hanging from the rafters of their mean abode. The Sydney Morning Herald showed no compassion for the woman suggesting in fact that her demise was the result of her being a ‘notorious drunkard.’  William James was duly arrested and charged with aiding in his wife’s murder.  The case against him was dismissed however, after a second trial, despite being found guilty.
No evidence suggests she was coerced but in 1840, barely aged thirteen, Caroline married William Collits in St Lawrence’s Church of England Sydney. Collits, who was ten years her senior, was the son of convict emancipist Pierce Collits.  Despite his unexceptional beginnings in the colony the latter man had prospered and acquired considerable property interests at Prospect and the Vale of Clwydd (near Lithgow). He went on to build Collits Inn and The Golden Fleece at Hartley.  Perhaps Caroline saw marriage as a way to shake off the demons of the past.
Yet Caroline’s marriage was equally unstable because William Collits – like her mother - was a lover of the demon drink.  The couple lived apart but finally reconciled only a short time before her death.  Ironically liquor, which determined so much of her short life, finally brought about Caroline’s tragic end.  Her broken and bloody body was discovered sometime after she told her husband to flee from a drunken brawl he was having with her brother-in-law John Walsh.  Walsh, already a convicted murder, was sentenced and put to death in Bathurst gaol. 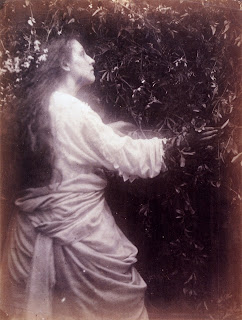 Is it any wonder that the ghost at the second bridge was said to have
…appeared to plead for aid (as far as I could see)
Its hands were on the tailboard laid,
Its eyes were fixed on me
The face, it cannot be denied
Was white, a dull dead white
The great black eyes were opened wide
And glistened in the light.
Pamela Smith Springwood Historians
References:
Henry Lawson, The Ghost at the Second Bridge, Henry Lawson & Hartley; Caroline Collits – a life short lived, http://www.megalongcc.com.au
Sydney Morning Herald – various editions.
NSW births, deaths and marriages indexes.
Ancestry.com, Decisions of the Superior Courts of NSW 1788-1899.
This article was printed in The Mountains Blueberry Magazine Issue 7, Feb. 2011
Posted by Pamela Smith BA (Hons) Hist. Adv. Dip. LFAH at 4:45 PM