Pamela Smith and I attended the launch of Glenbrook Historical Society’s Comrades in Arms which was composed of short biographies of Glenbrook men who had served in World War I.  We were inspired to begin researching and writing about the men who were listed on the Springwood District World War I Honor Roll.  This proved to be very much more difficult than we had thought, but in the five years it took to complete the task we became very close to our World War I veterans and mourned those who had died in that dreadful war.  In his introduction to our book, Remembrance: Springwood District Honor Roll 1914-1919 John Low wrote “Their research has rescued the men recorded here from the creeping anonymity that would have been their fate and given them back to their community as individuals who lived and breathed their own special human uniqueness.”  These men (and they were all men, no women) were certainly to a degree  anonymous with the Board hung inconspicuously on a side wall in the Springwood Civic Centre, and with many of the men proving quite difficult to identify.  A very few of them bore names we recognised from our research for The Making of a Mountain Community: a Biographical Dictionary of the Springwood District , but quite a number we discovered in the Nepean Times reports of Springwood in the war years.

One of these names was Ed Hope (proved to be Edward James Hope), born and reared in Kingswood.  He was employed by the Railway as a fettler at the time of his enlistment and we found that his name appeared on the St Mary’s Roll of Honour in Victoria Park and also on the Blue Mountains District War Memorial Hospital, Katoomba.  In October, 1915 the Nepean Times reported a farewell to new enlistees, J. Reddall and E. Hope.  They were both presented with wristlet watches from the Springwood people.
Part way through our research the National Archives of Australia digitised the World War I servicemen’s records making it very much easier and less expensive to access and check as they were now available on the internet.  Prior to that we sometimes wasted time and money purchasing records for the wrong men.  With only an initial for the first name shown on the Honour Roll it was easy to make a mistake.
Edward was one of 17 Railway employees on the Springwood Roll (by far the largest occupation group) and, as a fettler, he must have worked in various parts of the Mountains.  He was born in Kingswood in 1887 and was orphaned in 1898 when his mother, father and infant sister all died within a few months of one another.  A young sister, Florence, and he were presumably cared for by relatives.  He named Florence as his next of kin when he enlisted.
Edward was allotted to the 54th Battalion which was predominantly composed of men from N.S.W. Half of them were Gallipoli veterans .  The new recruits left Australia on the Aeneas on 20 December 1915 joining the rest of the Battalion at Tel-El-Kebir for training on 16 February 1916.  They embarked on the Caledonian for Marseilles in June, fighting their first major battle on 19 July 1916 at Fromelles.  They suffered casualties equivalent to 65 per cent of the Battalion’s fighting strength.  It was here that Edward died either on the 19th or 20th.  1,547 British and 5,533 Australians were either killed, wounded, taken prisoner or reported missing.  This was Australia’s bloodiest day in military history.
Florence, Edward’s sister, was notified that her brother had been taken prisoner.  This information came from a Red Cross communication resulting from information provided by the Germans.  Later the Royal Prussian War Office Medical Section corrected this and Florence was informed of Ed’s death and probable burial in the neighbourhood of Fromelles.  Florence, like many grieving and bereaved relatives wrote to the Army Base Records in Melbourne:
Dear Sir_
My brother No 4188 Private Edward James Hope, 54the Batt. Is Offically reported to have been Killed in Action on July 20th (previously reported missing) – He was my nearest Relative and if you could forward me some details of the manner of his Death I would be grateful.
& Oblige
Miss F.M. Hope
Kingswood
Nr Penrith
N.S.Wales
The Australian Red Cross Society endeavoured to record eye-witness accounts of deaths and woundings and Private J. Freehan, 4775 recorded the following at Etaples on 4 November 1916:
“Hope was of my Co.  He was seen killed by several of the Co. who reported the fact at roll-call  in my hearing.”
Early in 1917 the “effects” of Edward Hope were sent to Florence.  They consisted of a wrist watch and cover.  She wrote the following to the Officer in Charge, Base Records:
Dear Sir –
In connection with the wrist watch forwarded to me as Next-of-Kin to the Late 4188 Pte E.J. Hope 54th Battalion I have to inform you that this watch did not belong to my Brother – He had a Presentation silver wrist watch with his name inscribed on back.  The one I received was a gunmetal.  I managed to clean some of the rust off the back of watch – it has an inscription not very distinct, but plain enough for me to see that it belongs elsewhere.  I will forward this watch to you per post.  I was so disappointed to get the wrong watch and having received nothing at all up to the present time.
Yours faithfully,
F.M. Hope (Miss)
Kingswood
Via Penrith
N. S. Wales
It was very important to the wives, parents and siblings to receive something of their loved ones back from the war – something personal, not just an official medal.  We can assume that Edward’s “Presentation silver wrist watch” was the one presented to him at Springwood at the time of his enlistment.
Florence was required to confirm that she was Edward’s closest living relative before she received his medals and that seemed to be that.
However, in 2009 through the efforts of descendants of Fromelles soldiers lost in the battle, and with the support of the British and Australian Governments and the encouragement of the French, a massive initiative began to investigate known burial trenches at Fromelles and exhume the remains of British and Australian troops, identify them by modern scientific methods and rebury them in a special military cemetery.  The Sydney Morning Herald published photographs of the first 85 diggers identified in the Weekend Edition, 7-8 November 2009 and Private Edward Hope was one of these. 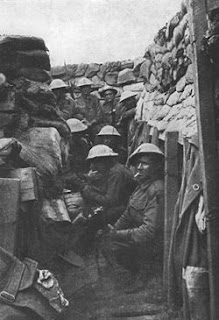 The last of these exhumed soldiers, one who had not been identified, was buried on 19 July 2010. His remains were transported in a gun carriage drawn by horses and accompanied by military personnel, Australia’s Governor General, Quentin Bryce, and Britain’s Prince Charles, both of whom delivered moving addresses.  But the most moving were the short addresses given by descendants of those fallen British and Australian soldiers.  They read letters very similar to those written by Florence Hope, expressing the fears and wishes of both the soldiers and those who waited at home.
There has not been universal approval of the reburial of men buried in mass graves at battle sites.  In the Sydney Morning Herald, 5 February 2010, Neil McDonald, historian and film critic, stated that “Exhuming and reinterring the war dead in more “suitable” sites always risks distorting history”.  But I feel that still grieving relatives will gain great comfort from knowing that their lost loved ones have been laid reverently to rest in a beautiful place, close to where they can be visited and remembered.
Shirley Evans
REFERENCES
Australian War Memorial  www.awm.gov.au
Australian Red Cross Society Wounded and Missing Enquiry Bureau Files, 1914-1918 War
Battalion Histories
Shirley Evans and Pamela Smith, “Remembrance: the Springwood and District Honor Roll 1914-1919”
National Archives of Australia  World War I service records
“Nepean Times”
N.S.W. Register of Births Deaths and Marriages
Springwood Historians “The Making of a Mountain Community: A Biographical Dictionary of the Springwood District,” 2002.
Sydney Morning Herald
Posted by Pamela Smith BA (Hons) Hist. Adv. Dip. LFAH at 5:37 PM