The Savoy Theatre located at 18-24 Katoomba Street, Katoomba, re-opened in 1936 with a capacity to accomodate an audience of 992 people.  The Kings Theatre (thought to be the oldest in the Blue Mountains) originally occupied the site before it was demolished to make way for the new Art Deco style Savoy Theatre designed by Crick and Furse, who also designed the Empire (Embassy).  A.F. Little was the builder.
The Carne family opened the original Kings Theatre as a live venue in the 1920s, but when dancing and roller skating were held there around 1925, the place was known as the Palais de Dance.
Otto Camphin staged a gala opening of the Savoy Theatre 18th December 1936 with 'Swing Time' starring Fred Astaire and Ginger Rogers.  A souvenier program produced for that night stated that Grace Bros. had been responsible for carpeting the new establishment.  Later in that same month the Savoy showed 'Sing Baby Sing'  starring Alice Faye and Adolphe Menjou. 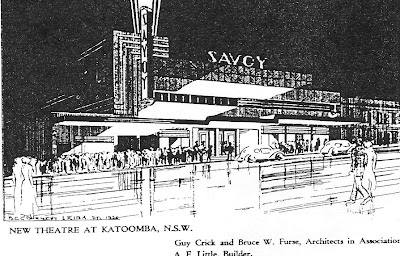 It has been said that the cinema complex re-opened as The Trocadero Theatre in the 1940s, however newspaper advertisements show that this was not correct.  It was the old Embassy Theatre that reopened as The Trocadero after remodelling had taken place in 1954.  The Savoy Theatre was still operating in May 1954 and screening John Mills and Dirk Bogarde in 'The Gentle Gunman' and Bill Williams in 'Blue Grass of Kentucky.'
Moving with the times, the Savoy staged Rock and Roll and Stomp shows in the 1960s. Fire gutted the building in 1982.  Theo Morris, who was the owner of the Carrington Hotel in the 1960s, owned the Savoy Theatre property in the 1980s; a decade that proved turbulent for the old theatre because Blue Mountains City Council had a demolition order on the old building, which had become severely dilapidated and an eyesore in the main street.  In 1986 Council had given Theo Morris the option of repairing the building but by 1989 the work had not been carried out.
In its lifetime it had served as a venue for live theatre, as well as a chocolate factory, a turkish bath,  a billiard saloon and grocery store.  When the Katoomba Centre Study was carried out in 1999  the theatre was not in use.  Today a restaurant occupies the front entrance foyer and the balcony above.

On childhood holidays in Katoomba in the 1950's the Savoy and Embassy theatres were a highight. By 1957 (my last holiday as a teenager) The Embassy had closed but the basement of the Savoy had been adapted as The Trocadero - can't remember whether the Savoy
was still operating as a cinema as well - hv an idea it was.

Isn't there a tunnel from the Carrington to the Savoy? I have heard that it leads under the Main street, as a wartime emergency escape route. (Also, apparently the Savoy was also at one point a brothel...

There are also rumours this tunnel went underneath the current railway to the old abandoned convent.

(I did find a small series of utility tunnels below this convent, however, none to the Carrington..

While renovating a room in a house in Blaxland I came accross two tickets for the Savoy Theatre in Katoomba for the 6th of January 1961 Evening Performance. Would you have any record of what was showing at that time?

Where is the entry to the utility tunnels and how did you manage to gain access to the old theatre?

Didnt the tunnels also go to beneath a church up the street as well?

I think that they might actually exist, lots of locals talk of these tunnels.

They say that it is locked tight at both Carrington and Savoy ends, and that the owners try to keep them secret. Access is limited to only a few people.

I know several people who rekon they have seen the doors to this tunnel, but never been inside.

If anybody has actually been into them, or knows a way in please let us know!